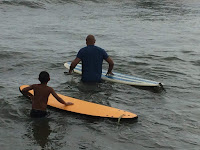 Once again I find myself writing about something I lost, something that perishes as I get older. This time its kiteboarding.

As we were driving to Charleston, S.C., I looked in the rear view mirror to see my surfboards that had once been tied to the roof of my car fall into the road and shatter like crystal. Fortunately no one was injured, and the only thing that suffered was my ego, made worse by the guy in the BMW that gave me the finger as he passed me, which I understood. I didn't like it but I understood.

Later that day, after the shock wore off and I found myself able to speak again, my wife suggested that maybe this was a message that perhaps I should give kiteboarding a rest for a while, and not replace the brand new board that I had just seen splayed on 95 South.

Honestly I thought about it before the words came out of her mouth. I have been learning how to kite surf for several years, and have seen moderate results. My image is not going to appear on Kiting Magazine any time soon, unless some one got a picture of the shattered board on the highway, which I may have mentioned earlier. But I did enjoy kiting. Any time I'm in the water, and there are waves around, I'm happy, but my progress was slow.

Before I made my mind up,  I was talking to my boys about going out kiting for the morning, they told me they wanted me to stay with them. Guilt. Sometimes this works and sometimes not. I was already feeling badly about the boards so this was compounded guilt, not the run-of-the-mill, simple guilt. 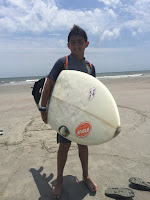 Either way, the boys were starting to embrace surfing and showing a real interest in the sport. I have always enjoyed surfing but it was put on the back burner a few years ago. The last two years it became something we did together. My sons started riding waves on my paddle board, then my nine foot longboard, then on a rented foam shortboard. Next we bought a Beater board, and this year my son got his first real shortboard. 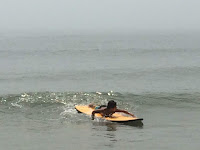 Theres nothing like paddling out with my boys, I feel like a parent who just got his kids on honor roll.  My father used to stand on the beach and watch me surf, and there was an excitement about it, but being with my boys as they go through the learning is unmatched. Coaching them on body position, paddling technique and catching a wave helped me get better as well. Their progress is moving much faster than my did, which is good because it can be very frustrating. Some days I'm more of a cheerleader, trying to help give them confidence and get over the anxiety everyone feels when they try a new sport. Like any difficult sport, it gets easier over time and with support.

I am happy I can give them something we all could use more of, and again, what I got is better than what I lost.